(DE)GROWTH IN TIMES OF CLIMATE CRISIS

This debate is moderated by Beatrix Ruf, strategic director of the Verbier Art Summit.

Beatrix Ruf
is a curator based in Amsterdam, the Netherlands, and co-designed the format of the inaugural Verbier Art Summit in 2017. She is currently a member of the Board of Directors of the Hartwig Art Foundation in Amsterdam and works on strategies and programs with the Garage Museum of Contemporary Art, Moscow, Russia. Beatrix served as the Director of the Stedelijk Museum Amsterdam from November 2014 to January 2018. From September 2001 to October 2014 Beatrix was Director and Chief Curator of Kunsthalle Zürich, overseeing a substantial expansion project launched in 2003 and concluded in 2012. Former occupations include: Curator at Kunstmuseum Thurgau, Warth from 1994-1998, Director of the Kunsthaus Glarus, Glarus from 1998-2001. In 2006 she curated the third edition of the Tate Triennial in London, she was Co-Curator of the Yokohama Triennial in 2008. From 1995 to 2014 she has been the Curator of the Ringier Collection and since 2010 she is a member of the think tank core group of the LUMA. In 2013 Beatrix co-founded POOL, a postgraduate curatorial program in Zürich. 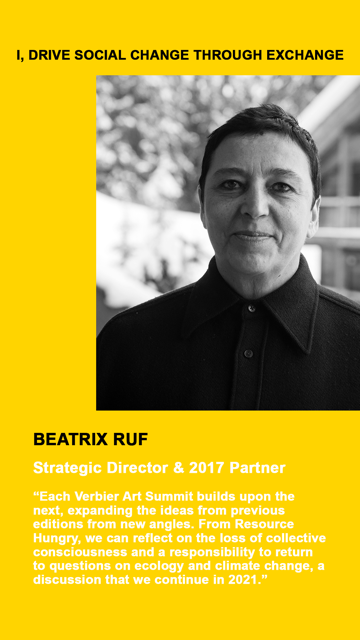